We met in 2015 at the Bologna Conservatory.
We studied together in the jazz department; Andrea studied piano and Francesca studied singing.

It took some time to figure out how to make music our career, but in 2018 Francesca began to perform solo with her ukulele in the streets of Turin.
In the beginning of 2019, Andrea took up the double bass, joined Francesca, and together we decided to create a new music project that would unite the opposing sounds of our two instruments, our voices, and our love for jazz music. 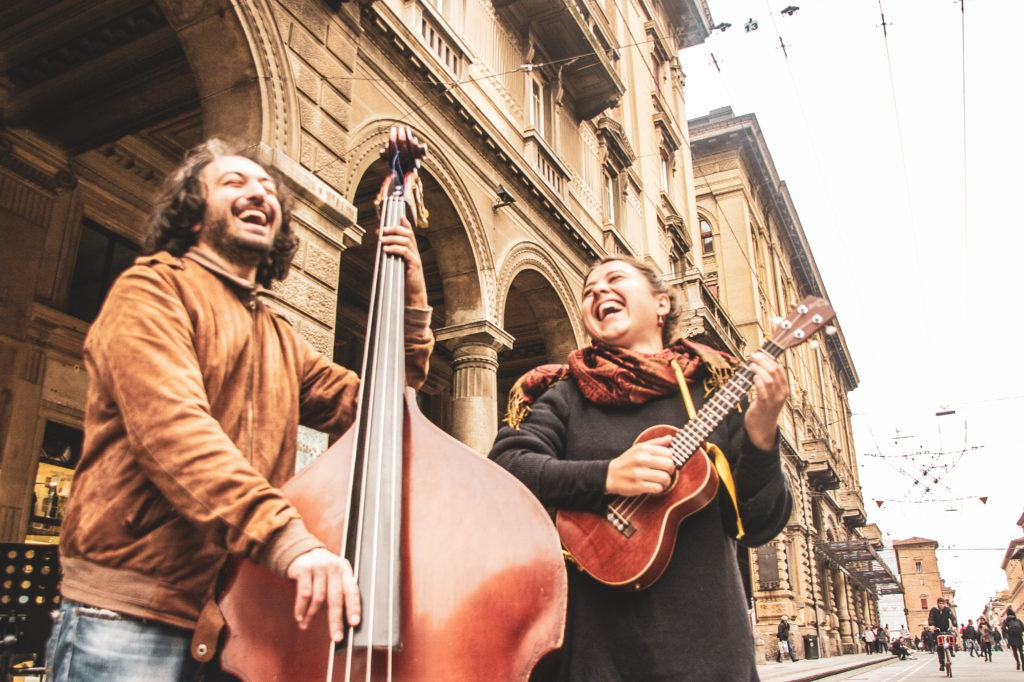 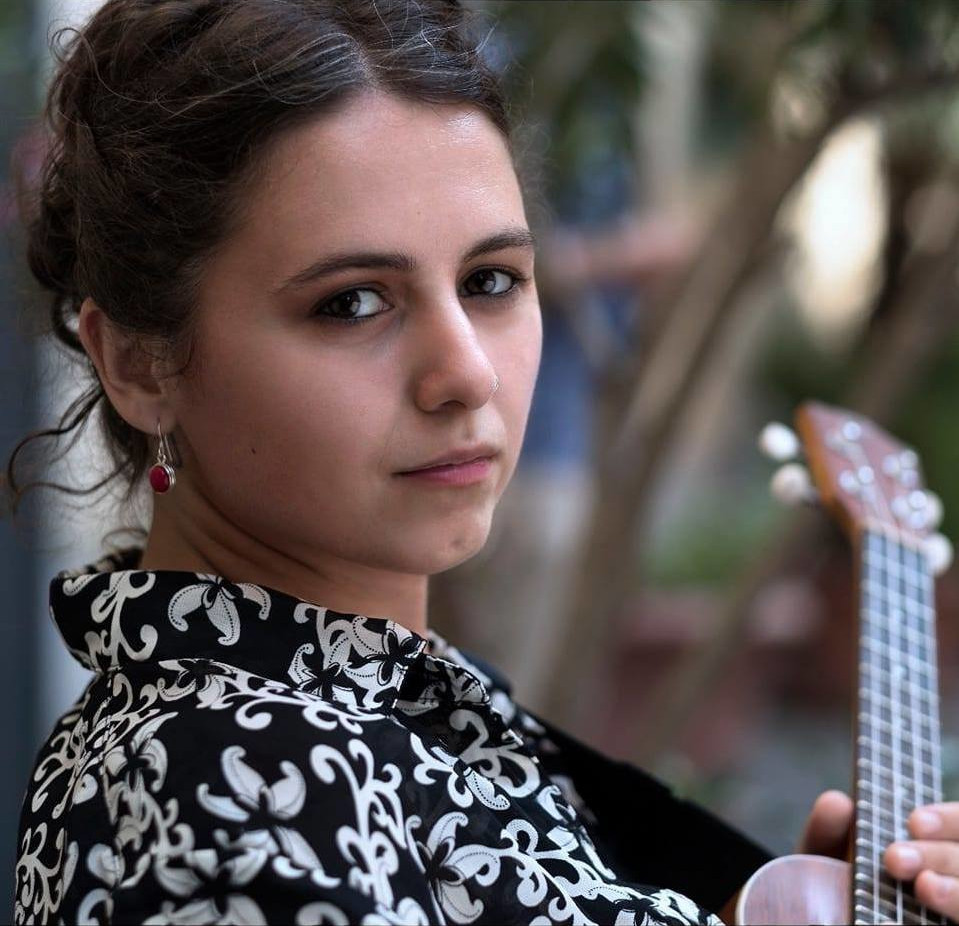 I was born December 1st (Sagittarius) to my mother Anna Maria, from Emilia, and to my father Aldo, from Calabria.
From my mother I inherited the beauty of emotions, and from my father the stubbornness typical of the people from Calabria.

As a child, I started singing with tapes that I would listen to on my walkman and later on CD.

I was 16 the first time I sang in public in a high school musical.
I was dressed as Joan Baez and I sang “Blowing in the Wind”.

When I was 20 I started taking singing lessons, and at 23 I enrolled in a jazz singing class in Bologna. I studied with Diana Torto, who taught me the beauty and care that is needed for a true and authentic study of jazz music.

In 2014, at 24, in order to chase the dream of being free and fulfilled, I decided to leave my office job at Unisalute and to give up my permanent contract there.
It was not an easy decision, but I would do it over one million times because it allowed me to do what I truly wanted to do and to deepen my study of music, theater, and singing in a professional way.

n 2016, I had a deep artistic crisis, made worse by health issues. So I decided to expand my horizons: I moved to Turin and enrolled in Philip Radice’s Atelier Physical Theater.
As a result, I had the opportunity to study theater, dance, mime, and clown.
Even though, for now, I have chosen not to follow that path, the two years I spend developing as an actress and clown allowed me to acquire a deeper awareness of myself and have radically changed the way I experience music, singing, and art.

For the last years the study of vocalism and singing in all of its many forms still is and always has been at the center of my life.

Of the various instructors that I have had, I especially thank Elisa Benassi, Teacher with a capital T of singing and voice. All of my gratitude and respect goes to her.

In recent years I wanted to learn to play an instrument, and I tried many different ones: piano, guitar, accordion… but none of them really worked for me.
That is until the day that I bought myself a ukulele: small, simple… perfect!
I haven’t let go of it since.

So this is me, more or less... I also love chocolate and pizza with gorgonzola!

I was born in Rimini on September 29th.
When I was nine years old, I came down with an ear infection, and in those boring days my mother returned to the house with a small classical guitar. She taught me a few chords that, to my surprise, she knew how to play. It is amazing how many songs one can play with just ten-ish chords. So, my mother taught me the classics that she grew up with: Celentano, Morandi, the Beatles, Simon and Garfunkel, etc…

And so began my adventure with music that, despite moments of struggle, has fortunately brought me to this point in my life.

Shortly after learning guitar, I began to take piano lessons in Rimini from Pietro Ceccarelli, who taught me the basics of reading music and piano performance. I would study with him for only a few years before deciding to completely quit piano around the end of middle school.

When I was 16, the desire to play music returned, and I asked my parents for an electric guitar, with which I started to learn by ear the pop songs of my time: Green Day, Linking Park, Radiohead, etc... with which I began to study by ear the popular songs of my youth: Green Day, Linkin Park, Radiohead, etc. That same year I ended up in the same class with my friend Simone, who also played the electric guitar. With him I started my first band, The Bards. We played the classics of 70’s rock and modern hard rock and metal covers, until we recorded our first CD of original songs.

This is how I started performing, first with The Bards and then with various groups of different genres: I played the keyboard in the Raquaná band, a cover band of the first two albums of the PFM (progressive rock); the guitar and keyboard in the UCS (indie rock); then the electric bass and keyboard in the Brazilian music band Ida e Volta, together with Anna and Daniele, my closest friends and partners in my musical adventures.

During my university studies in Bologna, I started to play Jazz with my friends and flatmates Nelson and Gigi. After a degree in Physics and various vicissitudes, at the ripe old age of 27, I decided to sign up for the conservatory, studying Jazz piano. Unfortunately, I had to leave that behind after two years, due to my father's death.

Upon my return to Rimini, I started to attend courses and workshops for theatre and clowning. After working as a vine pruner, as a prototype builder for various companies, and as a computer programmer, I finally decided, at 30, to quit and give myself completely to street art. I perform both as a musician and more recently as a clown for which I have developed a passion and still consider myself an apprentice. 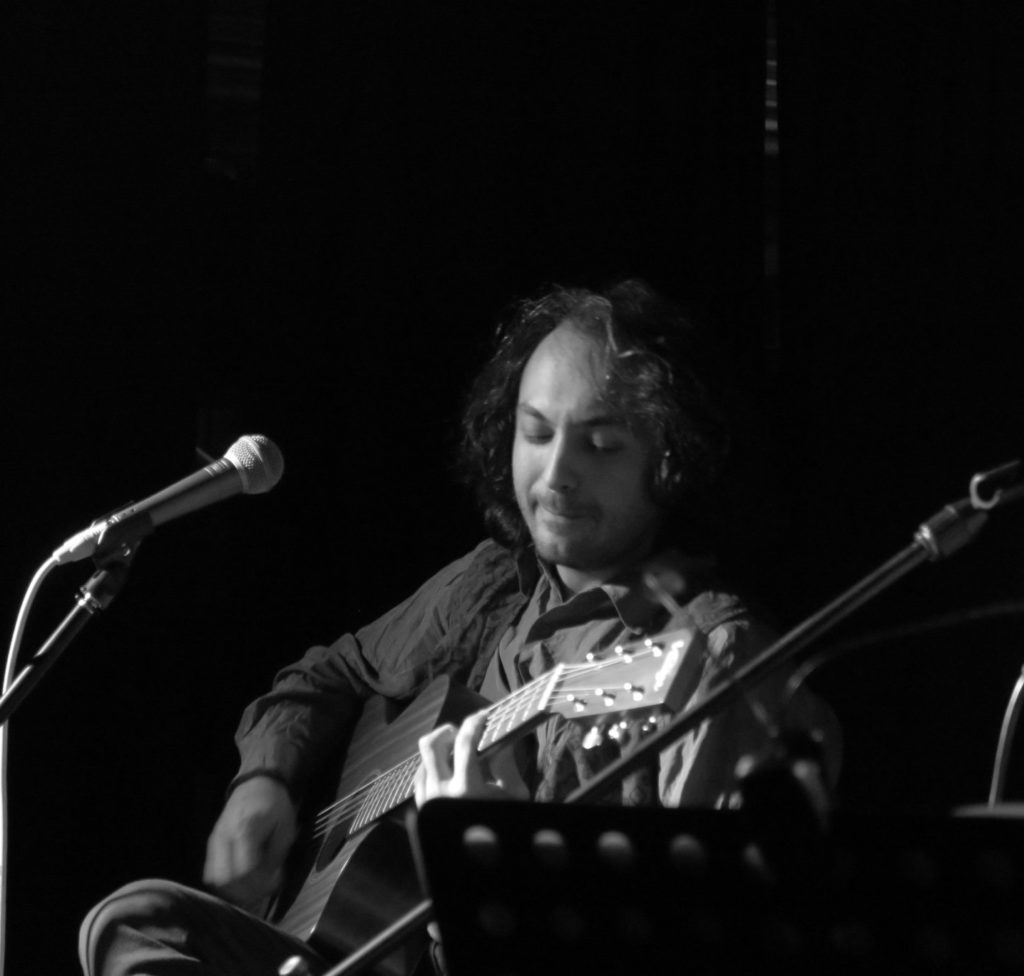